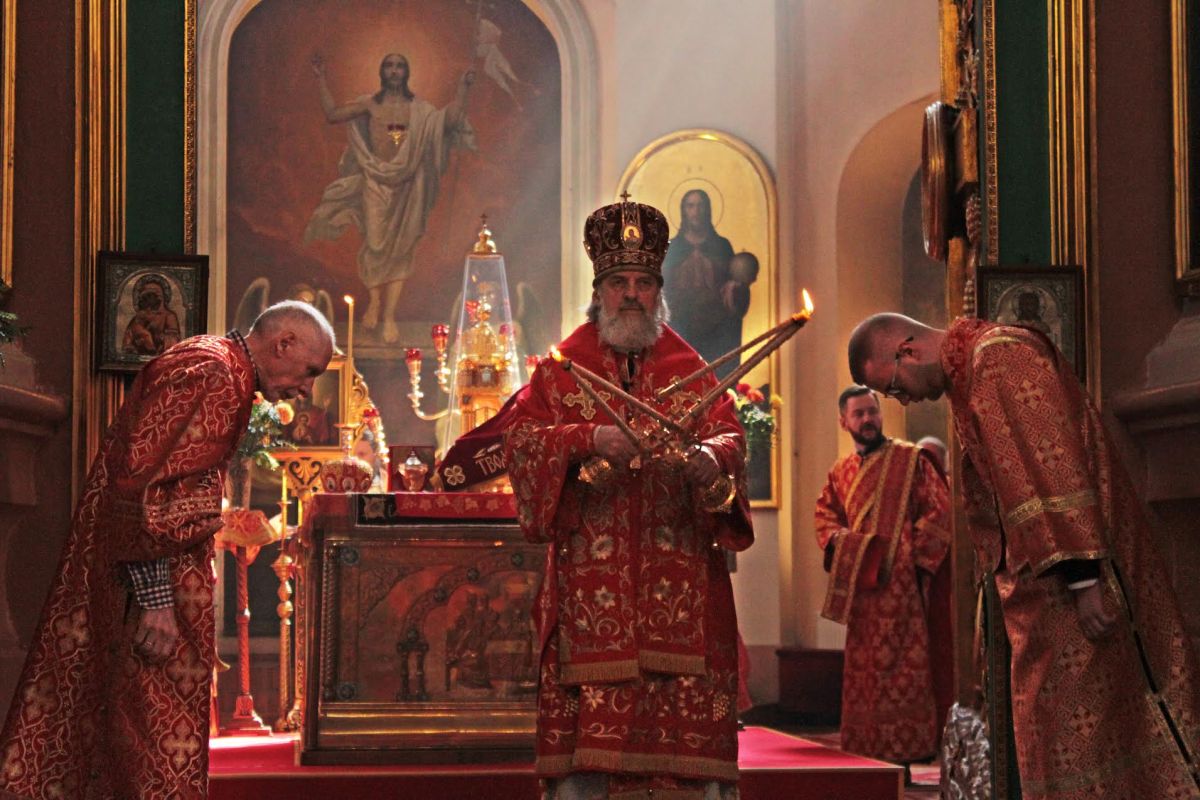 The Primate of the Lithuanian Orthodox Church, Metropolitan Inokentiy, has suspended five retired clerics from ministry for violation and contempt of oath, and other anti-canonical and schismatic actions.

By his Decrees of the 10th of May this year, Metropolitan Inokentiy suspended Vitalijus Mockus, Vladimir Selyavko, Georgy Ananyev, Vitalis Dauparas and Gintaras Sungaila from ministry without the right to wear the priestly vestments and cross. They have been warned that the continuation of their anti-canonical and schismatic activities may result in other ecclesiastical sanctions for them. Deacon Viktoras Miniotas and Deacon George Tsyburevkin have been given additional time to reflect on their anti-canonical actions and to offer the expected repentance.

By his Decrees adopted earlier in the day, Metropolitan Inokentiy upheld the petitions of Priest Vitalijus Mockus, Priest Vladimir Selyavko and Deacon Georgy Tsyburevkin to retire and dismissed them from service.

All of them, as well as Priest Vitalis Dauparas, Priest Gintaras Sungaila, Priest Georgy Ananyev and Deacon Viktoras Miniotas, who had been dismissed earlier, were given time to repent. “Unfortunately, they did not take advantage of this opportunity,” Metropolitan Inokentiy noted, adding that “the worst thing they did was to break the oath”.

According to the Primate of the Church, upon ordination as a presbyter or deacon, a candidate takes an oath which states: “... I promise and swear to Almighty God, before the Holy Gospel and the Cross” and he adds: “I will strive to conduct my ministry in all things according to the Word of God, the Church rules and the instructions of the Holy Office.” The candidate promises “to protect the souls entrusted to my care from all heresies and schisms” and also vows “not to leave the place of service to which I am assigned without the will of my Archpastor and not to leave voluntarily.” He likewise swears “in every matter of my service to have in my thoughts not my own honour, interest or profit, but the glory of God, the good of the Holy Russian Orthodox Church and the salvation of my neighbours.” “At the conclusion of my vow I kiss the Holy Gospel and the Cross of my Saviour,” says the candidate for the ministry of the Church.

“Having committed such a terrible canonical offence, the aforementioned clergymen withdrew from submission to their Archpastor, and then other anti-canonical actions followed on their part, multiplying their grave sin before God and the Holy Church. They have violated canonical and procedural norms and have taken the path of splitting the Church, they have allowed insulting and slanderous attacks against the Russian Orthodox Church, against the Lithuanian Orthodox Church and its hierarchs, they have misled representatives of state authorities and public organizations, hiding behind anti-war rhetoric,” said Metropolitan Inokentiy.

The anti-church actions of dissenters have disturbed the peace among Orthodox believers and have caused temptation in the ranks of spiritually inexperienced parishioners, thus deepening the church schism. The dissenters are sowing the seeds of sedition in Lithuanian society as well, disturbing the peace in the Christian community and threatening national security and stability in the country.

“Especially noteworthy,” said Metropolitan Inokentiy, “are the active, extremely harmful, provocative and schismatic activities in the media of the young priest Gintaras Sungaila. His so-called theological views are often superficial, and his statements have the clear goal of defaming the Russian Orthodox Church of the Moscow Patriarchate, the Orthodox clergy and people of Lithuania belonging to it, and distorting the real meaning of what is happening, even though it was in the Moscow Patriarchate that Sungaila was ordained an Orthodox priest,” the Archpastor reminded.

According to Metropolitan Innocent, to his great regret, his brethren, the aforementioned clergymen, have not repented of their canonical offences, although they have been asked to do so, but persist on their actions, which makes him to take appropriate measures, as his archpastoral duty compels him to do so. Metropolitan added that the door of repentance is always open to these clergymen.

Head of the Chancellery of the Lithuanian Orthodox Church, Bishop Ambrose of Trakai, will answer questions from journalists on 11 May 2022 at 01:00 PM in the Orthodox Cathedral of the Dormition of the Theotokos in Vilnius, 14 Maironio st.